Diabolos refers to an esper. For an enemy, visit Diabolos (Monster).

An unidentified esper that was sealed away in an enchanted mountain of Dirnado. With pitch black wings, it had a sinister appearance, and it is no wonder that the locals fear it as they would a demon. Having sealed it away ages ago, they have forgotten that it was an esper. With its own unique concept of values free from human morality, this esper lends the powers of darkness only to those who strike its fancy.

Diabolos can be obtained after you defeat him in Wicked Peaks. To unlock the dungeon, talk to the following people in Industrial City Dilmagia: 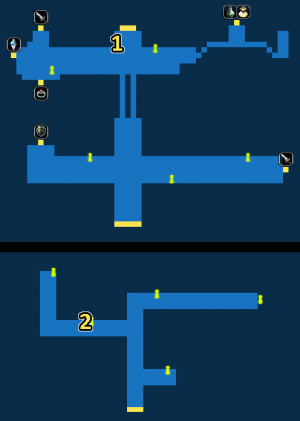 Once you have leveled him to the maximum level (30), an additional dungeon in Wicked Peaks, Trial of the Demon, will appear. Defeat his stronger version and Diabolos will be upgraded to 2-star

Once you have leveled him to Level 40, New Trial of the Demon will appear with an even more powerful version of Diabolos. Defeat him and Diabolos will be upgraded to 3-star

His resistance to Poison is +100% when he reaches 3-star