Kokuryu refers to an esper. For an enemy, visit Kokuryu (Monster).

A jet-black dragon which resides at the base of Raven Falls. This dragon holds both powers of nature and harmony, and quelled any natural disasters that befell the continent of Pharm. Though it was worshipped as a deity by the people of Pharm, this dragon held a deep respect for the humans as well, allowing an amicable relationship to develop despite their differences in species. Rain, seeking the esper's power, was challenged by the dragon to test the sincerity of his words.

Kokuryu can be obtained after you defeat it in Raven Falls Basin. To unlock the dungeon: 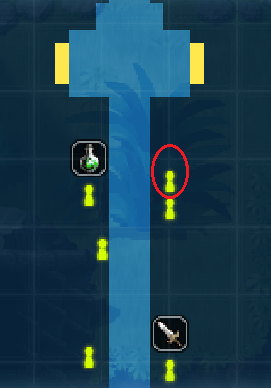 Then return to the world map to see Raven Falls Basin unlocked.

Once you have leveled Kokuryu to the maximum level (30), an additional dungeon in Raven Falls Basin, Trial of the Shadow Dragon will appear. Defeat their stronger version and Kokuryu will be upgraded to 2-star

Once you have leveled him to Level 40, New Trial of the Shadow Dragon will appear with an even more powerful version of Kokuryu. Defeat him and Kokuryu will be upgraded to 3-star

His resistance to paralyze is +100% when he reaches 3-star